At Aurora Orchestra’s ‘Love Song for the City last month at the Roundhouse, I’d been attracted by the idea of  a concert programmed around a theme that brought together the new in classical music (Michael Gordon’s Gotham of 2004) with the very popular (Leonard Bernstein’s Symphonic Dances from West Side Story) and the big strings (Richard Strauss’ Metamorphosen). Plus the fact that Gotham was created hand in hand with filmmaker Bill Morrison’ collage of vintage footage of New York.

Down below, the adults were seated cabaret-style around tables in the floor of the venue – presumably they were allowed drinks to fit the mood. Up in the Gods where we were, the refreshment of choice for the extraordinary quantities of children and ‘young people’ (more in one classical music concert than I’ve ever seen assembled) was sweets in wrappers. Right behind us was a row of 10 or so boys aged 13 or 14. Their responsible adult had safely seated herself across the wide aisle. During the moving, solemn strings of Metamorphosen, the rustling of the wrappers was near overwhelming, but I bit down on my middle-class, middle-aged shushing reaction, and even on the temptation to turn round and ask to share the sweets.

I’m so glad I did. The boys were just as noisy in the other pieces, but this time it was ‘Get ready for this bit,’ and ‘That was brilliant!’ – an interactive, unembarrassed and gleeful enjoyment of the music that actually added to my own.

I don’t know for sure but I suspect sweets also found their way into the hands of the audience at The Broadway, Barking earlier in the month, when Horse + Bamboo played their re-telling of the Red Riding Hood story. Primary school groups filled the auditorium – and until the play started their excited noise stormed the heights of the hall. But once the actors began there was a moment of hush – and then noises again. But the noise was of them not only engaging with the story – calling out, warning the characters, gasping in fear – but also somehow with the means by which the story was being told. 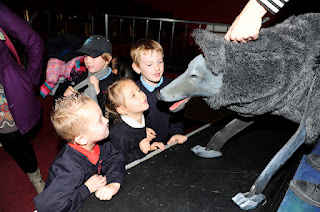 Horse + Bamboo uses actors and puppets, and actors who work puppets, and actors who become puppets. The fact of using different sized puppets prompted at least one cry of ‘It’s bigger’ – indicative not just of delicious fright but also, I thought, of an enjoyment that perspectives could change and that it was a puppet being used as a puppet. With hand shadows, animation and an air balloon that turned from real to cardboard to animation, it seemed the children were given, subliminally, a lesson in how to make theatre, too.