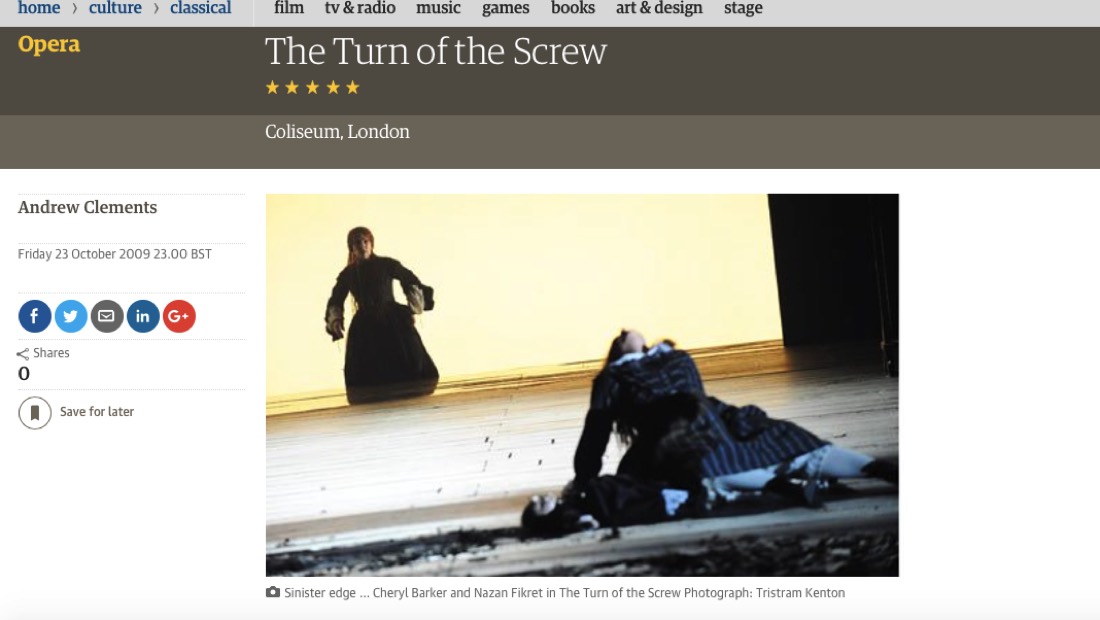 So, I finally sat through a whole opera without walking out. Admittedly, Britten’s The Turn of the Screw is relatively short, as operas go, but nonetheless I feel I have turned a corner.

In view of the decided risk that we would hate the experience, we had gone for high-up, relatively cheap seats at the London Coliseum. I hadn’t realised that would mean we couldn’t see the sur-titles (the website had said the seats were restricted view but hadn’t specified what was restricted about them). Luckily, several rows in front of us were empty so we shifted forwards – problem solved.

And what do I now think of opera? As soon as the singing started, it felt just like a musical – on stage or in film. Perhaps it was because the singing was in English; or perhaps it was that we were able to read the words, but suddenly the whole thing was more like a sung play than I had expected. The staging was atmospheric, and once we’d decided not to read the synopsis after the first act, I was caught up with the drama of not knowing how the story would unfold. Atmospheric and creepy it certainly did feel, and by the end I could even admit that the music, the particular melody of the voices, was adding to that atmosphere.

I was not swept away with high passion or awe at the beauty of drama, music and voice in combination. I did not leave feeling that opera was the highest artform of all, as aficionados love to claim. I left feeling like I do when I have sat through a rather good film. But at three times the cost of a rather good film. Certainly less emotionally-charged than after a theatre play. But mostly I left no longer intimidated by the idea of going to the opera.